The unfair distribution of vaccines, an embarrasing déjà vu

In other epidemics, poor countries have been at the back of the queue. We urgently need a system that distributes vaccines more fairly worldwide during pandemics.

Last week, Dr Tedros Ghebreyesus, the Director of the World Health Organisation (WHO) warned of an impending “catastrophic moral failure“. He pointed out the fundamental unfairness that a young healthy person in a rich country with a low risk of dying would get vaccinated before a vulnerable elderly person in a poor country.  That he had to say this is as disappointing as it is predictable.

One of the brightest points of this wretched pandemic is the previously unimagined speed of the development, testing and licensing of COVID-19 vaccines, some of which are based on completely new technology and seem extraordinarily effective. However, the COVID-19 pandemic has highlighted the glaring fact that technological miracles have not been matched by similar creativity and will to ensure equitable accessibility of these vaccines.

Ensuring a mechanism for equitable global need-based pandemic vaccination is crucial. First, because of the moral imperative in protecting those who need it most, wherever they live. Second, because this virus is highly capricious and pandemics come in waves, leaving plenty of time for a future COVID-19 wave to overwhelm fragile health systems in low- and middle-income countries. Third, the longer this virus circulates globally, the more opportunity there is for the emergence of variants some of which may be more transmissible or potentially evade current vaccine formulations, making them less effective for everyone. Last, the global economy relies on a global workforce, and studies show that control of COVID worldwide is crucial for economic recovery in high-income counties.

From bird flu to swine flu

The world has been thinking about global pandemic vaccination for over 20 years.  In 1997, the  emergence of deadly bird flu in Asia threatened to be the next massive global pandemic and stimulated investments in pandemic preparedness, and development of pre-pandemic vaccines covering the different strains of bird flu.

Early issues of equitable access came to the fore; to make bird flu virus vaccines, companies need to have the relevant viruses, and these came predominantly from South-East Asian countries.  In 2007, Indonesia stopped sharing bird flu virus strains until they had assurances that they, as a highly affected country, would have access to the resultant vaccines. This caused somewhat of a global public health diplomatic incident, but led to the development of a WHO legal framework whereby which benefits of pandemic bird flu vaccines would be allocated fairly; sharing of bird flu virus isolates by Indonesia subsequently resumed.

The next influenza pandemic in April 2009 caught the world by surprise, as it turned out not to be avian flu from Asia, but swine flu from Mexico. A vaccine for this pandemic turned out to be relatively straightforward to manufacture compared to bird flu requiring only an adjustment of the existing process for routine influenza vaccines. Richer countries pre-ordered large consignments of vaccines to protect their populations, immediately triggering concern about equitable access of pandemic vaccines.  The WHO started the Vaccine Deployment Initiative and received commitments for over 100 million doses of the swine flu vaccine and began to organise a system for distribution of doses based on national implementation plans and prioritisation.

By October 2010, 78 million doses were distributed to 77 countries, fewer than the total number of doses administered in the United States by then.  In addition, delays plagued timely vaccine distribution which largely occurred after the first wave of transmission in many countries and at least 6 months after high income started vaccinating. These delays were due in part to complex legal agreements on liability for donated vaccines, the approval of vaccines by WHO, and the development of deployment plans by countries, a prerequisite for receiving vaccine. Since the pandemic turned out not as serious as initially feared, the availability of vaccine doses did not become major issue and enthusiasm for vaccination waned in many countries.

More than a decade after the last pandemic, we are struggling with the same issues.  Vaccine nationalism has reappeared and countries have made huge bilateral deals to protect their populations.  Once again, a WHO legal and financial framework, COVAX, has been established and commitments made to ensure access of vaccine doses for lower income countries.

However, COVID-19 is far more deadly than the 2009 swine flu pandemic, and, unusually for infectious diseases, has hit some high income countries hardest.  But will COVAX work? The cost of the vaccine per se is not a huge bottleneck; at least two pharmaceutical companies AstraZeneca and Johnson & Johnson have committed to provide the vaccine at low cost during the pandemic, although additional support is needed for the logistic challenges to safely and effectively implement vaccination in settings with basic health care systems.

A bigger threat to equity is limited production capacity to meet global needs and obligations to higher income  countries, many of whom invested in COVID vaccine research and development, and who have reserved enough doses to vaccinate their whole populations several times over. But distribution is not smooth. In the first quarter of 2021, for example, AstraZeneca delivered fewer vaccines in the EU than had been announced, in Belgium perhaps less than half the number promised.

As terrible as this pandemic is, many of the most vulnerable countries have not been as catastrophically affected as we initially thought and, once again, we may have dodged the worst consequences of vaccine inequity. The current debate, though very much a déjà vu. It is also worrying that initial results from Cambridge University’s renowned Gupta Lab show that the Pfizer vaccine does not offer full protection against the British variant. Just as for bird flu, global strain surveillance and sharing may become key to refine vaccines which may lead to the demand of stronger assurances of benefit from countries providing strain data.

We need a better institutional system for future pandemics, so that access to vaccines is needs-based and in order to mitigate nationalistic instincts. This serves everyone’s self-interest and is simply the right thing to do. 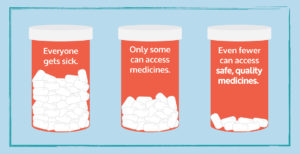 Fighting poor quality health products in times of COVID-19 and beyond: the need for a multi-stakeholder approach