Poor-quality medicines are especially prevalent in low- and middle-income countries. They represent a threat for individual and public health, by causing therapeutic failure or direct toxicity, by contributing to the emergence of resistance, and by eroding trust in health systems. Unfortunately, they often go undetected (due to the lack of efficient reporting systems), or they are only detected after treatment failure or toxicity become evident.

Repressive measures may help fight those medicines that are falsified on purpose, but they will do little to stop the circulation of substandard medicines, which requires sustained capacity strengthening of national regulators, improved surveillance on international supply chains, and increased awareness of purchasers including international donors.

Thanks to the support of the DGD, the ITM manages a scientific portfolio focusing on access to quality-assured medicines in low- and middle-income countries, in close collaboration with the QUAMED group. Our specific activities include policy development, research, advocacy, networking and education.

Medical research is more and more delocalised to low- and middle-income countries, often for global health reasons (to address the local health needs). It is of paramount importance that such research is methodologically and ethically sound, and responsive to the needs of communities.

We animate the informal network of clinical researchers that previously operated under the frame of the Switching the Poles network. We stimulate exchange of view, scientific collaborations and ethical reflection. 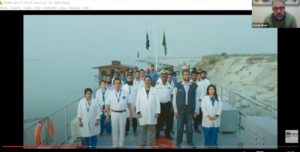 Recording of the webinar Reinforcing health systems in Climate Crisis: One health in action and Floating hospitals