The World Health Summit 2022 in Berlin

We are made of Water and Stars: Planetary Health at the WHS

At the opening ceremony of the World Health Summit in Berlin, the first one led in partnership with the WHO, a fire alarm rang insistently. Protesters pushed the button. Outside the hall, they did not shout against the vaccines or promote conspiracy rumors. On the contrary, rebel scientists glued academic papers to the door displaying their angry frustration for the gap between knowledge and action. I deeply understand their “Don’t look up” feeling, in addition to the lack of democratic participation in public health decision making. They’re probably preached to the converted, however, because the same idea was clearly expressed in many panels at the WHS. I mean, if we skip the panel on NCDs which forgot to evoke the environmental determinants or the Gates foundation’s call for an important but vertical health program (not surprising, we know Bill’s ideas on climate via his holy book on how technology will save us).

However, I felt relieved by hearing about climate action at the health summit, and health will feature at COP27, coming soon, despite the fact that dr. Tedros recently showed his frustration for the lack of consideration for health during climate negotiations. The climate crisis is a health crisis. We knew that and now, the public health sector, so far a bit disconnected from climate issues, knows it too. The WHS confirmed (to me, at least) that Planetary Health is the way, and it is a long, long road.

I admit that my report suffers from some bias due to the intentional selection of meetings, but it’s interesting to note that climate-related ones made the agenda busy.
Some were labelled One Health and they offered interesting and rational examples of coordination and collaboration among sectors, like the One Sustainable Health forum. Moreover, the Quadripartite initiative launched the One Health action plan. This concrete focus on operations, like the surveillance of zoonosis, addressing identified emergencies, like the AMR, show the competitive advantage of this approach. Unfortunately, animal health has not been coupled with animal welfare.

Climate justice, health equity, and decolonizing knowledge systems were rather raised during Planetary Health meetings. Here, the traditional calls for more evidence or for multistakeholder mechanisms were traded for inspiring insights of a new paradigm. Indigenous knowledge and citizen science join the storytelling effort to fill the imagination gap toward a resilient, sustainable, and healthy future. Native nations’ knowledge and their language carry the inner interconnectivity of human and nature in a relational way of understanding that we are our environment – we are made of water and stars. Yet, once again, it was unclear how to implement all that.

Let’s acknowledge the elephant in the room, though: the needed radical changes in our lifestyle to exit the “Capitalocene” (no, I didn’t hear this term at the summit, on the contrary I had the pleasure to listen to the patronizing discourse of big pharma about their investments towards UHC). I’m not recuperating an ideological perspective here, but just noting that if global health promotes a change, analysis of power relationships cannot be hidden.

My takeaway: the whole global health architecture should be deeply reshaped, not only because the lessons learnt from the pandemic experience, or because of the obvious consequences of our dramatic inability to stop war, but because prevention via planetary health determinants of our global public goods is the key challenge from now on. 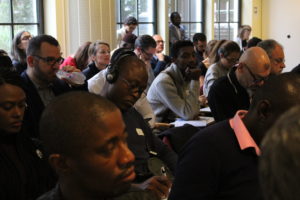 The World Health Summit 2022 in Berlin